The research team led by HASUO Ichiro at the National Institute of Informatics (NII, Japan) developed a methodology to provide strong mathematical safety guarantees to automated driving vehicles, together with its underlying theory on formal logic. This research was conducted under the ERATO MMSD project （*1） funded by the Japan Science and Technology Agency (JST, Japan).

Building on the existing methodology called "Responsibility-Sensitive Safety (RSS)" for mathematical proofs of automated driving safety, the research established its extension called "Goal-Aware RSS (GA-RSS)" that expands RSS's application domain to a variety of real-world driving scenarios. Specifically, the techniques in GA-RSS derived from theoretical results in formal logic （*2） enable one to provide mathematical safety proofs to more complex driving scenarios than before, especially those which require achievement of certain goals such as an emergency stop.

The outcome of this research was published in IEEE Transactions on Intelligent Vehicles, a top journal on automated driving on July 5, 2022 (US Eastern Time).

To realize the adoption of automated driving technology, simply improving the safety of automated driving vehicles is not enough. Guaranteeing a high level of safety and explaining to the public why the vehicles are safe will be necessary before automated driving vehicles will be accepted on public roads. At present, mainstream approaches to guaranteeing safety focus on analyzing accident statistics and testing using computer simulations. However, these empirical and statistical approaches are haunted by questions such as "How do we know that it is safe enough?" and "Can it be explained in a way that society finds convincing?" It thus follows that the creation of a logical approach to explaining safety in a way that is easy for people to understand is highly desirable.

In this context, RSS, a methodology proposed by Intel Corporation and detailed in Figure 1, has recently been attracting attention. RSS is intended to provide mathematical proofs for the safety of automated driving vehicles by expressing traffic safety rules in the form of explicit mathematical formulas and then proving the validity of those formulas. Mathematical proofs are the ultimate form of safety guarantee, both in terms of the degree of assurance provided and in the fact that tracing each logical step of a proof can explain why its conclusion is correct.

Though mathematically proving the safety of complex systems such as automated driving vehicles is generally quite difficult, RSS makes it possible by focusing on "logical safety rules" that vehicles must follow. Because the logical safety rules established by RSS are general and independent of manufacturer or vehicle type, they can be used as international standards, industry standards, and traffic regulations; hence, these rules are expected to greatly accelerate the social acceptance of automated driving vehicles. Although RSS is currently the focus of considerable interest in both industry and academia, the technical basis for formulating and proving logical safety rules has yet to be developed. Consequently, RSS has thus far only been applied to simple driving scenarios, such as following the vehicle ahead on a road without intersections. 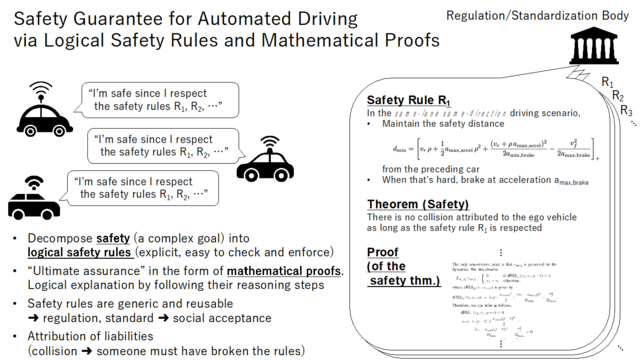 Fig 1: A proof-based approach to automated driving safety, shared by RSS and our proposed method, GA-RSS. In addition to proposing a rigorous logical safety rule, we mathematically prove a safety theorem that guarantees no accidents will occur as long as this logical safety rule is followed.

We utilized our expertise in formal logic to establish a new technical foundation for RSS and proposed a novel extension that overcomes the weaknesses of RSS. Our extension is called goal-aware RSS (GA-RSS). While the conventional RSS only covered collision avoidance in simple driving scenarios, GA-RSS can formulate logical safety rules and prove their correctness for complex driving scenarios that require the achievement of goals such as an emergency stop at a safe point while avoiding collision with other vehicles. This extension is an essential technology for the full-fledged deployment of the RSS methodology and its application to a diverse and complex set of real-world driving scenarios.

We proposed a system of formal logic called "differential Floyd-Hoare logic" (dFHL) as the technical basis for enabling GA-RSS, and designed and implemented a workflow and software support for deriving logical safety rules based on it (Figure 2). Conceived of as an extension of the well-known "Floyd-Hoare logic" in software research, dFHL is a system of formal logic for efficiently proving the safety of digital/analog hybrid systems（*3）, such as automotive control. dFHL greatly expands the scope of applications of RSS by making it possible to partition and sequentially analyze complex control plans for automated vehicles. 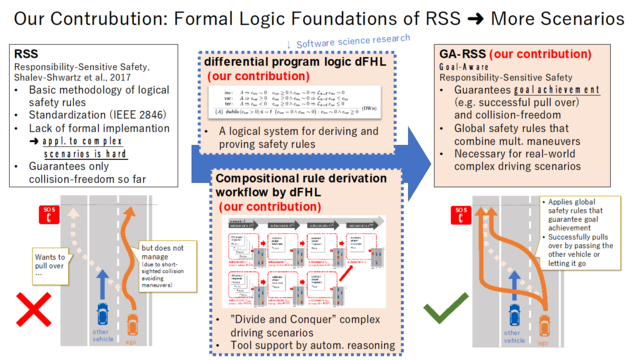 Fig 2: An example of an emergency stop. RSS (left) was combined with our differential program logic dFHL (middle) to realize GA-RSS (right), making it applicable to a variety of automated driving situations. In the example shown here, the conventional RSS safety rules enforced short-sighted collision avoidance behavior and the emergency stop was not achieved because other vehicles were in the way and lane changes could not be executed. The proposed GA-RSS safety rules incorporated overarching control plans for passing other vehicles by accelerating--or letting them go by braking--to achieve the goal of an emergency stop.

Active attempts to apply RSS to real-world automated driving are already underway, with Intel applying RSS to its products and IEEE P2846 facilitating discussions of international standardization. We believe that our development of GA-RSS will greatly expand the scope of RSS from simple scenarios to realistic and complex scenarios that require the achievement of objectives through a combination of multiple actions, such as emergency stops, and will make a significant contribution to the efforts of the industry to guarantee safety and the development of international standards. If the use of GA-RSS enables broader application of the concept of RSS, and if the ultimate guarantee of safety by mathematical proofs can be provided for various automated driving situations, society's concerns can be dispelled, the adoption of automated driving vehicles can be facilitated, and the development of the industry can be stimulated.

Logical safety rules must be developed and proven for each and every one of the many possible driving scenarios. Use of the rule derivation workflow and software support designed in this research makes it possible to develop logical safety rules for a complex scenario in a realistic timeframe of only a few weeks. Because the logical safety rules created in this way are general, that is, independent of manufacturer, vehicle type, etc., they can be used for many years and constitute valuable assets for society.

"Our mission is to contribute to society through our research in formal logic by designing a language (logic system) for writing proofs and providing software to support the activity of writing proofs. We had the opportunity to collaborate on this endeavor with Mazda Motor Corporation and contribute to the important field of automated driving vehicles. I believe that our theoretical research, refined over many years, is now seeing the light of day (in terms of application), and, at the same time, it stands as an example of the importance of basic mathematical and theoretical research.

The ERATO MMSD project, together with other projects such as the MIRAI eAI（*4）, CREST CyPhAI（*5）, and CREST ZT-IoT（*6） projects , are all part of the activities of NII as a center for comprehensive software research. In particular, by pursuing the theoretical and mathematical foundations of software science, the ERATO MMSD project will contribute to new application areas, such as cyber-physical systems, artificial intelligence systems, and ICT system security."

This research has been made possible thanks to the support of the Japan Science and Technology Agency's ERATO MMSD Project (JPMJER1603). It was conducted in collaboration with Mazda Motor Corporation（*7）.