－Major advances in the technical groundwork for remote experiments from Japan, 10,000 km away from ITER－

The National Institutes for Quantum and Radiological Science and Technology (QST), one of the implementing agencies of the Broader Approach (BA) activities, with the European Joint Undertaking for ITER and the Development of Fusion Energy (Fusion for Energy), in collaboration with the National Institutes of Natural Sciences (NINS) National Institute for Fusion Science (NIFS), the National Institute of Information and Communications Technology (NICT) National Institute of Informatics (NII), and the ITER International Fusion Energy Organization (ITER Organization), have connected a dedicated broadband network between one server in the ITER and another in the ITER Remote Experiment Centre (REC) at the International Fusion Energy Centre (IFERC) in Rokkasho, Aomori, Japan. Using this network, they have repeatedly demonstrated the stable high-speed transfer (approximately 7.9 Gbps) of 1TB of data within 30 minutes, the assumed conditions in the initial experiments of ITER. This achievement is the result of a synergetic effect from collaboration in state-of-art information science and technologies and in remote cooperation for nuclear fusion research. These results are a big step towards the construction of the REC in Japan, 10,000km away from the ITER. The amount of transferred data of 50TB per day is the world largest level inter-continental (between France and Japan) high speed data transfer from one site to another site.

The TCP/IP protocol is generally used in the computer network technology, especially for the transfer of scientific technical data. In simple terms, with TCP/IP data is sent only after an acknowledgment is received. This means that as the distance increases, the data transfer rate decreases. This problem is solved with Massively Multi-Connection File Transfer Protocol (MMCFTP) developed by NII. It is one of the world's fastest protocols for international cooperation in cutting-edge science and technology fields. In parallel, the SINET5 network, operated by NII, commenced operations in April of this year (2016). This direct link between Europe and Japan reduces the communication distance between the two. A broadband dedicated link (10 Gbps) between the ITER and the REC was also constructed. Using this dedicated line and data generated from the LHD device at NIFS and JT-60U device at QST (previously JAEA), a large amount of experimental data, assumed to be 1 TB in the initial ITER experiments, was successfully transferred to the remote site. Based on this achievement, it is expected that a remote data mirror site (duplicate site) can be used for analyses of "big data" generated by the Industries, and a backup for fail-safe against natural disastersetc.

The results were presented at the IAEA Fusion Energy Conference in Kyoto from October 17 to 22, 2016.

Background and purpose of research development

As part of the BA activities, the ITER Remote Experimentation Centre (REC) is being prepared in Rokkasho, Aomori, Japan. The REC will be able to participate remotely in experiments at ITER which is under construction in France (Fig.1). In addition, by transferring and storing ITER's experimental data and creating a database locally, it will be possible for researchers around Japan to access all the data with a lower latency and analyze the experiments more effectively.

This requires all experiment data from ITER to be transferred to REC in its entirety, however, transfer speed decreases drastically when the transfer distance increases, such as with the distance between EU and Japan, because of the limitations of the TCP/IP protocol and the bandwidth of the network.

When NIFS conducted high-speed data transfer tests between ITER and Japan in September 2009, a transfer speed of up to 3.5 Gbps was maintained for 205 seconds (86 GB of data was transferred). However, this was not enough to transfer the entire amount of data per day generated from the experiments at ITER.

The amount of data generated from each experiment in ITER is massive, and it must be analyzed rapidly between experiments at a pace of about every 30 minutes to an hour. This means the data must be transferred to REC within that timeframe. 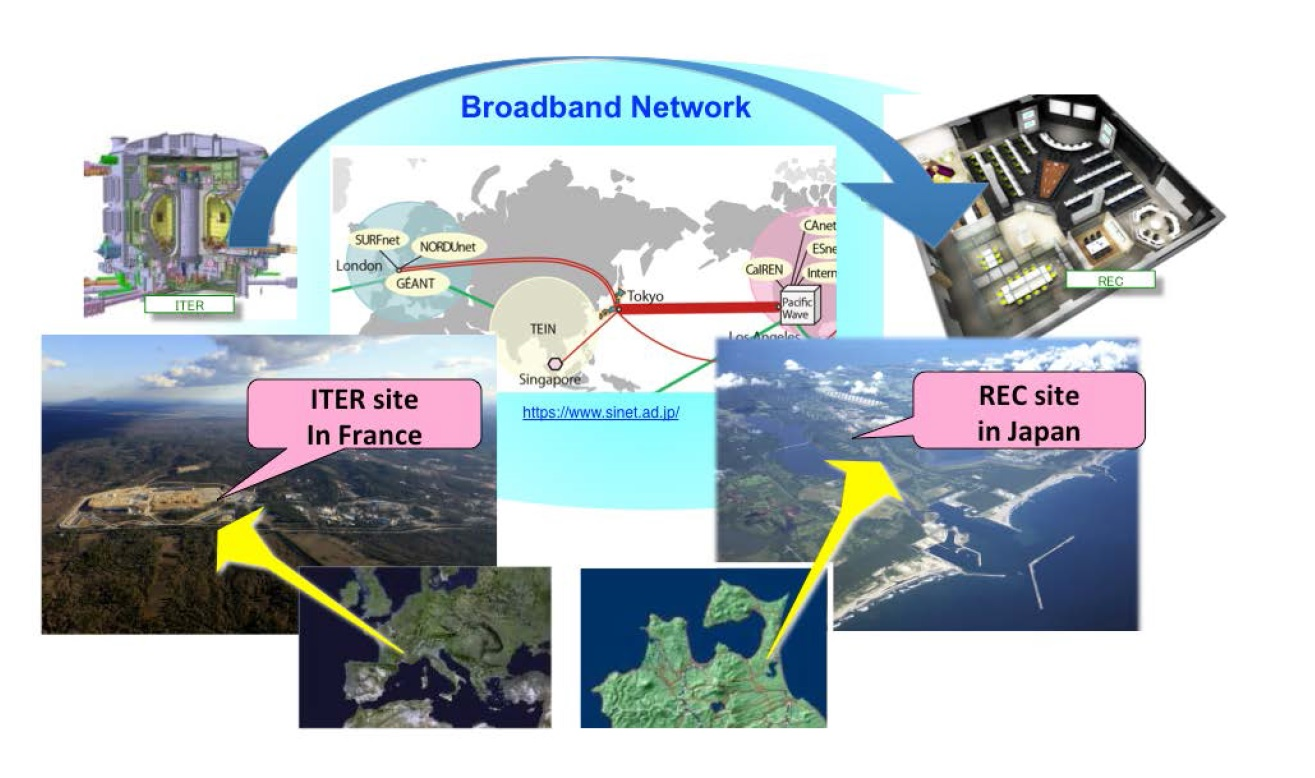 Method and results of research

The 5th generation of the SINET network, "SINET 5", developed and operated by NII, is a game changer. A direct link 20 Gbps broadband network between Japan and Europe has been established, and the distance of the network line has become shorter than ever (Fig. 2). QST connected the broadband domestic and international network of SINET 5 prepared in Rokkasho for the BA activities. In addition, a test environment at the ITER site is prepared in cooperation with the ITER Organization. 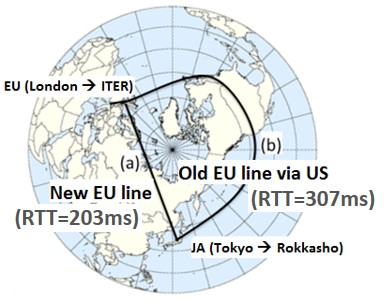 Fig.2 (a) New international line between EU and Japan, (b) International line via US. The distance of (a) is about 2/3 of that of (b). The round trip time shortened to less than 200ms. Figure of Northern Hemisphere: By Sean Baker (Marvin01 | talk) [CC BY 2.0], via "Wikimedia Commons"

With the TCP/IP protocol, data is only sent after an acknowledgment is received in order to confirm that each packet being sent is correct. Over long distances, it takes a long time for the confirmation of each sending packet to arrive. As a result, the data transfer speed for large amounts of data decreases drastically. Massively Multi-Connection File Transfer Protocol (MMCFTP), developed by NII for transferring big data in the interest of international cooperation of science and technology, is one of the world's fastest protocols for transferring data over long distances. In MMCFTP, the high-speed data transfer of massive amounts of data is done by splitting the data file, creating multiple connections simultaneously, and balancing the amount that is sent over each connection to keep a steady speed. By adopting MMCFTP technology in the nuclear fusion field, the full capability of the network connection could be exercised. As a result, the entire amount of data estimated to be generated in the initial experiments at ITER (1TB) can be transferred within the limited time window between experiments.

By connecting the servers in the ITER site and REC with a dedicated broadband network, the massive amount of data, around 1.05 TB, can be transferred every 30 minutes at high speed (7.9 Gbps at maximum and 7.2 Gbps at average measured from the ITER side server) for 50 hours. These results are major advances in the technical groundwork for remote experiments in Japan 10,000 km away from the ITER site. The amount of transferred data of 50TB per day (105TB for 50 hours) is the world largest level inter-continental high speed data transfer from one site to another site (Fig. 3). These results are a big step towards the construction of the REC in Japan. Accordingly, all the experiments data at ITER can be transferred immediately and also the references and analyses became possible for the entire data from Japan, 10,000 km away from the ITER site. This means a big issue was solved toward the realization for remote experiments participation.

This achievement shows that the data estimated to be generated in the initial experiments in ITER (1TB per experiment) can be transferred in their entirety to the REC in less than 30 minutes, which is consistent with the estimated interval between experiments of about 30 minutes to an hour. Further development of this technology will allow the massive amounts of data expected to be produced when ITER is in full operation (about 50 TB per experiment).