The Vienna University of Technology in Austria, the National Institute of Informatics and Nippon Telegraph and Telephone Corporation (NTT) in Japan have demonstrated the superradiance（*1） emission of microwave light in a solid-state system. The emission is from the Nitrogen-Vacancy (NV) centers（*2） in diamond manufactured in the University of Tsukuba with coupling to a microwave resonator. This phenomenon was predicted theoretically decades ago - but experimentally very difficult to definitively demonstrate. One speaks of "superradiance" when an atom gives off energy in the form of light, bringing a large number of other atoms in the immediate vicinity, also to emit energy at the same time. This creates a short, intense flash of light, i.e. "superradiance". What was previously only possible using free atoms with special symmetry properties has now been realized at the Vienna University of Technology in a solid-state system Nitrogen vacancy centers, which acts as artificial atoms, present in diamond emitted a strong directed flash of microwave radiation.

This demonstration was made possible through a collaboration between the Vienna University of Technology which performed the device fabrication and measurements, NTT Basic Research Laboratories & the National Institute of Informatics, which provided theoretical modelling of the experiment, and the University of Tsukuba who fabricated the NV sample. These results were published in "Nature Physics" on December 4, 2018.

This work was supported by the Top-/Anschubfinanzierung grant of the TU Wien, the John Templeton Foundation (JTF) project "The Nature of Quantum Networks" (ID 60478), the Austrian Science Fund (FWF) in the framework of the Doctoral School "Building Solids for Function" Project W1243, the Wiener Wissenschafts-, Forschungs- und Technologiefonds (WWTF) project No MA16-066 ("SEQUEX"), the MEXT KAKENHI Grant-in-Aid for Scientific Research on Innovative Areas "Science of Hybrid Quantum Systems（*3）" no. 15H05870 and the Japan Society for the Promotion of Science KAKENHI grant no. 26220903 and grant no. 17H02751.

According to the laws of quantum physics, atoms can be in different states. "When an atom absorbs energy, it is in the so-called excited state. When it returns to its lower (ground) energy state, the energy is released again in the form of a photon. This usually happens by accident, at a completely unpredictable time" explains Johannes Majer, a research group leader at the Atomic Institute of the Vienna University of Technology.
However, if several atoms are close together, an interesting quantum effect can occur: one of the atoms emits (spontaneously and randomly) a photon, thereby affecting all other excited atoms in its neighborhood. Many of them also release their excess energy at the same moment, producing an intense flash of light. This phenomenon is known as "superradiance". Unfortunately, this effect is not directly observable with ordinary atoms. Super radiance is only possible if you collect the atoms in an area that is significantly smaller than the wavelength of the photons to be emitted. This means you have to focus the atoms into a space significantly less than 100 nanometers cubed. In this regime the interactions between the atoms are so strong that the super radiant effect may no longer be possible.

One way around this is to use a quantum system: tiny defects built into diamonds. While ordinary diamonds consist of a regular grid of carbon atoms, lattice defects were deliberately incorporated into the diamonds. At certain points, instead of a carbon atom, there is a nitrogen atom, and the adjacent point in the diamond lattice is unoccupied. These lattice-targeted diamonds were made in Japan by Junichi Isoya and his team at the University of Tsukuba. They have succeeded in producing the world's highest concentration of these desired defects without causing other damage. Just like ordinary atoms, these diamond defects can also be excited - but with photons in the microwave range which have a very long wavelength. Our hybrid system has the distinct advantage that we can work with electromagnetic radiation that has a wavelength of a few centimeters. This makes it straightforward to place all the individual NV centers within a one wavelength radius.

Now if you excite all of this NV centers (trillions of them in our case) it usually takes hours for them all to relax their ground (lowest energy) state. However, this happens within a few hundred nanoseconds due to the superradiance effect. The first photon that is sent out spontaneously causes all other defect sites to emit photons as well. We observe a superadiant flash of microwave light.

Our hybrid system consisted of a 3D lumped element resonator coupled to the dense NV ensemble contained in the diamond sample (Fig 1). The resonator confines the magnetic field such that the electron spins are homogeneously coupled to the cavity mode with almost no spatial dependence on the coupling rate. Operating in the fast cavity limit, a microwave pulse excites the NV centers electron spins. This is followed several hundred nanosecond later by a flash of microwave light. At the same time, optical measurements on the ensemble show the sudden decay of all the NV centers (Fig 2). Our theoretical calculation showed good agreement with the experimental results, proving that the observed phenomenon can be well explained by the superradiant effect. 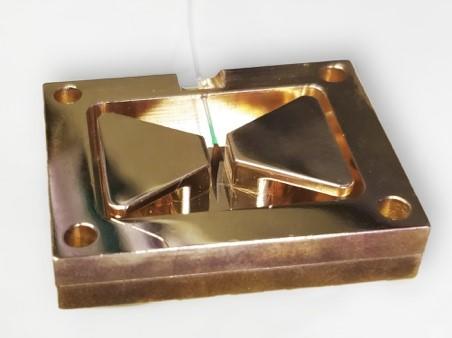 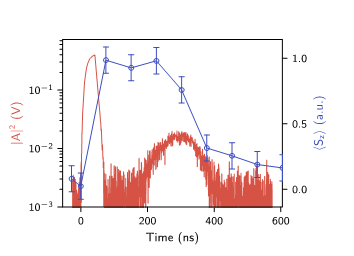 Figure 2: Dynamics of the hybrid system. Initially both the resonator (red curve) and ensemble (blue curve) are in their ground states. A microwave pulse then excites the ensemble. At approximately 300ns the ensemble rapidly relaxes and a flash of microwave is emitted from the resonator. Without superradiant relaxation, the decay time for the ensemble would be of order 40000s.

- Superradiance is inherently a nonlinear effect of both the intensity of the emitted microwave pulse and its emission time in terms of the number of electron spins present in the ensemble. This scaling needs to be confirmed. It is extremely difficult however to exactly determine the number of spins in different samples. The diamond lattice however possesses four different crystallographic orientations which results in four different possible directions for the NV center to be in. In the ensemble we have roughly one quarter in each direction and so by applying appropriate magnetic fields we can tune 1,2,3 or 4 orientations into resonance with the resonator meaning we can vary the number of spins from N to 2N to 3N to 4N (even without knowing N exactly). Owing to this breakthrough, the nonlinear scaling was successfully demonstrated for the first time.

Superradiance is based on the same basic principle as the laser - there is the stimulated emission of photons triggered by a photon which strikes energetically excited atoms. Nevertheless, these are two quite different phenomena: In the laser a background of many photons is constantly needed to stimulate new atoms while in superradiance, a single emisstion triggers the flash of light all by itself. The demonstration here is a first step in the development of many potential solid-state quantum technologies including the maser (a laser at microwave wavelength).

(*1) Superradiance is the phenomenon where N local emitters interact with a common light field. If the wavelength of the light is larger than the separation of the emitters, then those emitters interact with the light in a collective and coherent fashion resulting in a high intensity light pulse.
(*2) The negatively charged nitrogen–vacancy center is a paramagnetic point defect centre in diamond which consists of a nitrogen atom replacing a carbon atom next to an adjacent lattice vacancy.
(*3) A hybrid Quantum system is a composite device composed of two distinct subsystems which in principle should have better properties than the individual systems alone. In our case, it is an ensemble of electron spins (from negatively charged nitrogen–vacancy centers) coupled to a 3D lumped element microwave resonator.