Researchers at the National Institute of Informatics (NII), Nippon Telegraph and Telephone Corporation (NTT), Osaka University, the Japanese-French Laboratory of Informatics (JFLI) and Tokyo University of Science have discovered that time crystals can be used to simulate complex quantum networks.

Crystals are widely present in our daily life in the form of solid materials whose atoms self-organize in regular patterns. While these arrangements tend to be periodic in space, a newly discovered type of matter also shows such regularity in the dimension of time. These exotic systems are called time crystals and they can only be observed under special circumstances. Although recent quantum technology developments and our excellent controllability of quantum devices now allow researchers to explore time crystals in the laboratory, though little is known about their properties and applications. This recent work published in Science Advances focuses on the application of tools commonly used in network theory to represent these systems which allows for a deeper understanding of their structures. With this, researchers were able to represent the melting of a time crystal in terms of networks and found the emergence of a very special type of structures: scale-free networks. These complex networks have the same structural properties as today's Internet or airplane networks. As such having a physical system that allows its efficient simulation in the lab has enormous implications in the technology arena.

Typical crystals emerge in nature as the atoms that form a solid arrange themselves in a periodic regular structure. When this happens, it is said that a continuous translation symmetry of free space is broken, as the system is no longer invariant under the arbitrary translations of its atoms. The breaking of such a translation symmetry can also be done in the temporal dimension, giving raise to time crystals. A recent example of this phenomenon is presented as a 2T discrete time crystal (2T-DTC). Here an arrangement of interacting two-level systems (such as spins) are under a periodic external drive that repeats every time T. The time-translation symmetry breaking occurs when the dynamical response of the 2T-DTC shows a different periodicity than the external drive, as it needs twice the time (2T) to go back to its initial position, as illustrated in Figure 1. 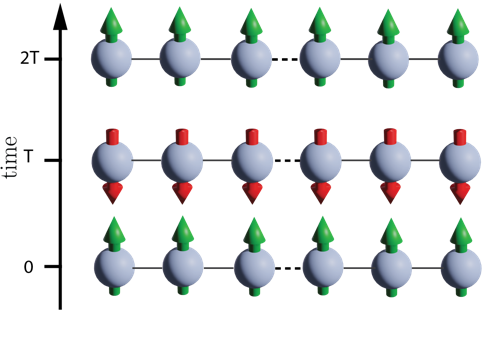 Figure 1 Dynamics of a 2T-DTC. Driving performs a global rotation on all spins every period T. The system takes 2T to go back to its initial position.

This research shows that complex network structures such as scale-free networks as illustrated in Figure 2 emerge from slowly melting a 2T-DTC. In there, the authors used a model of a discrete time crystal that can be experimentally realized and showed that its structure can be melted by adding an error to the drive (which plays the role of an increasing temperature). "Aided by a network visualization technique, for the first time we shed new light on the mechanisms by which the time crystal melts", says Marta Estarellas. "Also, it became clear that, with an increasing value of error, the melting of the time crystal behaves like a phase transition, something similar to the way crystals, such as a block of ice, typically melt.", adds Victor Bastidas.

Using Floquet theory one can capture the periodic nature of time crystals and obtain information of the system at the relevant discrete points of its quantum dynamics. "We represented this information in terms of networks using a percolation rule and analyzed how its connectivity changes as the time crystal melts due to an error in the drive", says William Munro. In addition, the use of their network visualization technique made it possible to observe the temporal connection of the time crystal's quantum states for the first time, allowing them to extract information of the properties of the crystal by analyzing the properties of its associated network.

Similarly, to quantum computers, which show an enormous power even if they are small, time crystals also present this advantage as they can embed exponentially large networks using a small-time crystal device. "Potential applications of our results include the use of time crystals as a quantum simulator to analyze the structure of very large complex networks present in our daily lives, something that in the classical world would otherwise be impossible as it would require a huge amount of computing resources.", says Marta Estarellas. "Put it this way, using this method and with just several qubits one could simulate a complex network of the size of the entire worldwide Internet", adds Kae Nemoto. In addition, their introduced techniques proofed networks to be a valuable tool to represent quantum complex systems, something that will surely aid in the future study and understanding of quantum many-body systems.

This research has been made possible thanks to the support of the Japanese Ministry of Education, Culture, Sports, Science and Technology Quantum Leap Flagship Program (MEXT Q-LEAP) JPMXS0118069605, the MEXT KAKENHI Grant-in-Aid for Scientific Research on Innovative Areas Science of Hybrid Quantum Systems grant no.15H05870, and the JSPS KAKENHI grant no. 19H00662. This project was also made possible through the support of a grant from the John Templeton Foundation (JTF 60478). ※

※The opinions in this publication are those of the authors and do not necessarily reflect the views of the John Templeton Foundation.