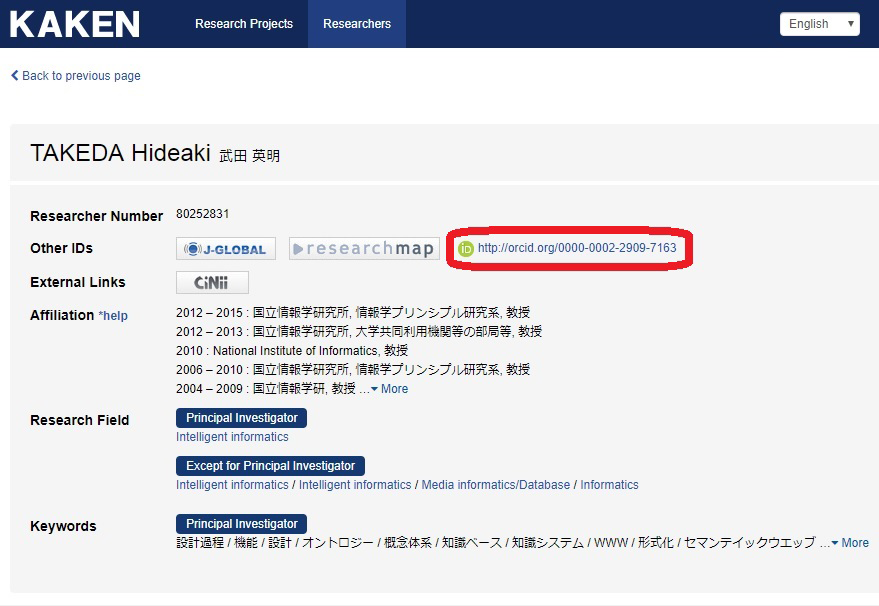 ORCID, Inc. (Open Researcher and Contributor ID, https://orcid.org/) is an international non-profit organization based in the United States. ORCID provides a unique identifier (ORCID iD) for each researcher. The identifier transcends region, discipline and institution, and it allows persistent researcher identification even if the researcher changes his or her institution, relocates to another country, or shifts his/her field of research. Name variations and changes due to such reasons as marriage can be properly tracked and asserted.

KAKEN database archives the information on research projects supported by "Grant-in-aid for Scientific Research" granted by the Ministry of Education, Culture, Sports, Science and Technology (MEXT) and Japan Society for the Promotion of Science (JSPS). Using KAKEN database, a researcher will be able to find his/her personal profile with a direct link to his/her ORCID iD on the same page. At the same time, the researcher's national research identifier will be added to his/her ORCID record, linking the two identities and research output together. The addition of ORCID support to KAKEN database follows its launch of a new search feature in June, which allows researchers to easily find their data. The researcher can search for his/her project titles, collaborators and research outputs such as scholarly articles, books, and conference proceedings by his/her name.