The National Institute of Informatics (NII, Chiyoda-ku, Tokyo, Japan; Dr. Masaru KITSUREGAWA, Director General) has constructed a long-distance link with a world's top-class transmission speed of 400 Gbps between Tokyo and Osaka as part of an academic information network, SINET5(*1) The existing SINET5 provides 100 Gbps links covering all of Japan's prefectures. The new link has a capacity four times that of existing links. It will come into service on December 9.

The purpose of constructing this 400 Gbps link is to increase the transmission capacity between the Kanto area centering on Tokyo and the Kansai area centering on Osaka and thereby to resolve the tight capacity situation amid soaring demand for data communication between the two regions where universities, research organizations, and other entities are concentrated. This implementation removes the issue about network resources being occupied by high-volume data communication and ensures stable communication. The updated infrastructure meets demands for further data increases and new high-volume data transmissions in inter-university collaborations and large research projects. 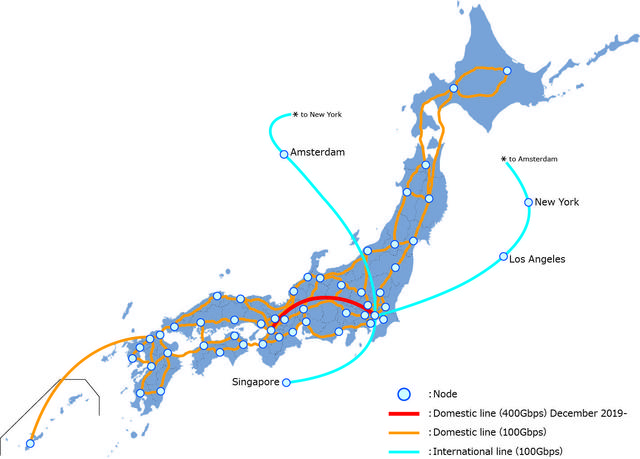 Figure: General view of SINET5, in which a 400-Gbps link (shown as a red line) has been added between Tokyo and Osaka

SINET is a network utilized by universities and research organizations across Japan. At the launch of its current version, SINET5, in April 2016, ultra-high-speed 100 Gbps lines constructed between data centers in each prefecture in Japan. In March 2019, its international links with Europe, the United States and Asia were also upgraded to 100 Gbps. At the moment, at least 920 universities and research organizations are connected to the regional data centers, enjoying some of the best communication performance in the world between research sites inside and outside Japan.

In addition, communication demand was expected to rise for the purposes of disaster recoveries at research organizations across the country, large-scale data transmission for major research projects, research in the medical sector with the use of uncompressed full-spec 8K video and the expansion of international collaboration following an enhancement of SINET international links to 100 Gbps(*2). It thus became more and more necessary to boost the communication capacity between Japan's two major regions.

The recent work upgraded the communication capacity between Tokyo and Osaka with low-loss large-core fiber cables(*3) that are superior in long-distance, high-capacity transmission and state-of-the-art advanced digital coherent optical communication systems(*4) to establish a 400 Gbps link with the total optical fiber length of at least 600 km. This long-distance link is one of the finest pieces of equipment in the world being operated as a practical network. It will ease data traffic congestion that causes communication quality deterioration and provides greater stability in communication.

The knowledge acquired from the operation of the newly constructed 400 Gbps link will be utilized in the design and construction of the next generation of SINET, due to be launched in April 2022.

High performance computing environments can be remotely utilized from all over Japan. Featuring large bandwidth and a low latency, SINET is frequently used for the transfer of data to be analyzed and analysis results.

In addition, given that it has become possible to analyze big data, more and more data is being stored. And the importance of backing up data is of growing significantly. From the perspective of disaster recovery, it is becoming increasingly common to set up two separate backup locations which often selected one in the Kanto and another in the Kansai areas. Accordingly, the demand of speeding up data transfer and data synchronization between distant sites is increasing.

The 400Gbps link enables high capacity data-transmissions between the Kanto and the Kansai areas. It will shorten the duration for synchronization and increase synchronization frequency to help reduce data loss arising from failures in backup process. In addition, the higher capacity link removes data traffic congestion that would cause quality deterioration. This reduces data retransmission processes and brings simultaneous multiple transfer processing successfully without affecting one another.

Advancement of research in large projects

Japanese scientists have successively won Nobel prizes in particle physics and astronomy. Large-scale experimental facilities in these areas are jointly used by researchers around the world. With large-sized detectors and other devices, more and more data is being observed as they are updated.

Japan plays important role as a research center in the Asian region with new large-sized experimental facilities. Also, Japan is expected to have data mirror sites(*5) for projects implemented with overseas experimental facilities. A combination of the capacity expansion of SINET international links to 100 Gbps with this time construction of a 400 Gbps link will provide Japanese and overseas researchers with better access to data-intensive projects and bolster international collaborative research.

The medical sector expects the enhancement of video resolution to 8K to be helpful to pathological diagnoses in telemedical services, telesurgery, and training and education for medical students. In consideration of the link speed at the transmission location, the existing 8K video transfer is achieved by two ways, one is compressing video data and the other is combining divided- 4K video streams with video stream synchronization. Data compression can be delivered through narrow band lines, but it needs results in a poor response speed since its long processing time. Combining divided-4k video streams has the risk of video stream synchronization failure due to difference in transfer delays and video loss due to transfer deficiency. Transfer of 8K video without compression or division was therefore anticipated. The currently common technology transfers full resolution 8K(*6) video at 48 Gbps. It can be supported by SINET5. Meanwhile, full-spec 8K(*7) video transfer featuring yet higher image resolution requires 144 Gbps, which causes SINET to face a line speed issue.

The 400 Gbps link will sufficiently support the full-spec 8K video transfer. It will accelerate the realization of telemedical services with the use of high-resolution video.