The NII's international exchange activities involve not just everyday activities advanced by individuals and groups based on the initiative of faculty members and researchers, but activities undertaken proactively by the NII as a research institute (including the NII International Internship Program and MOU grants). In addition, the NII deepens its international exchange activities by inviting and accepting researchers from overseas, by holding lecture series presented by prominent researchers, and by enrolling international students in the Department of Informatics in the Graduate University for Advanced Studies. Other recent international cooperation activities include the NII Shonan Meeting and the implementation of the Japanese-French Laboratory for Informatics (JFLI) and the special German Academic Exchange Service (DAAD) program.

The GLO staff is composed of the NII faculty and staff. The chairman of the GLO is the deputy director general. Visiting professor Henri Angelino has been appointed acting director to support the chairman.

InTo promote energetic, systematic international exchange with overseas universities and research institutions, the NII concludes International Exchange Agreements (MOUs). As of January 2018, it had concluded MOUs with 109 organizations in 29 countries. To promote the sending of researchers and students abroad and the acceptance of researchers and students from organizations with which it has concluded MOUs, the NII implements the NII International Internship Program and MOU Grant programs and provides financial aid. It engages various other exchange activities as well, including joint research projects, seminars and symposia, in addition to researcher and student exchange.

4. International Exchange based on MOU

Since its inception in 2005, the N II International Internship Program (outlined in the table below) has contributed significantly to the NII's research activities by promoting exchange with organizations with which the NII has concluded MOUs and by accepting and sponsoring interns.

The MOU Grants were established in 2005 as a system of financial assistance for research exchange with organizations with which the NII had concluded International Exchange Agreements (MOUs). MOU grants provide assistance for travel expenses (airfare, sojourn expenses) to overseas researchers and to the NII faculty members. The grants are provided when accepting a researcher from abroad or when a researcher travels abroad for the purpose of research exchange between the NII and an overseas university or research institution with which the NII has concluded or plans to conclude an MOU.
In implementing the MOU Grant program, twice a year, the NII receives applications from faculty members for sending or accepting researchers under the MOU Grants.
After the GLO reviews these applications, it selects the applications with the highest overall priority and assigns financial assistance.

The Non-MOU Grants were established in 2006 as a financial assistance system for research exchange with organizations other than those with which the NII had concluded MOUs.

Non-MOU Grants provide financial assistance for travel expenses (airfare, sojourn expenses) for researchers visiting the NII from abroad to perform joint research and similar activities between the NII and overseas universities or research institutions with which the NII has not concluded MOUs.

As with MOU Grants, the GLO reviews the research plan applications for Non-MOU Grants, selects the plans it considers best, and provides financial assistance.

Researchers invited to the NII who have had outstanding research accomplishments are asked during their stay to give a series of lectures on informatics from the point of view of their own specialties. With such lectures we have been able to acquire specialized knowledge from these researchers and carrying out meaningful exchange with them.

In February 2011, the NII launched the NII Shonan Meetings, the first Dagstuhl-style seminar* held in Asia. The purpose of the NII Shonan Meetings is to resolve various challenges in the field of informatics by assembling the very best researchers from around the world to engage in intensive discussions on issues in the field of informatics in an atmosphere that promotes close interaction. Kanagawa Prefecture provides the use of its facilities for these meetings.

The meeting's venue, the Shonan Village Center, provides an environment in which participants can focus on research activities in a setting that provides both spectacular natural beauty and easy access from Narita Airport.
*Dagstuhl Seminar: A key seminar series in the field of informatics, held roughly every week, in Dagstuhl, Germany. The series is based on a structure whereby participants live in close quarters for one week for intensive discussions on various topics under a specified theme for each seminar.

The Japanese-French Laboratory for Informatics (JFLI) was created in 2008 as a hub for the collaboration in informatics between Japan and France and regroups French National Center for Scientific Research (CNRS), University Pierre& Marie Curie (UPMC, Paris 6), University of Tokyo (Graduate School of Information Science and Technology), the NII and Keio University. 2012 will see an extended cooperation between the same partners who have decided to create an International Mixed Unit (UMI), which will focus on 5 main topics : (1) Next Generation Networks, (2) High Performance Computing, (3) Software, Programming Models and Formal Methods, (4) Virtual Reality and Multimedia and (5) Quantum Computing. 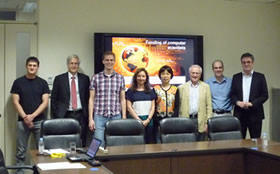 NII has concluded in 2009 its first MoU for 4 years with DAAD (The German Academic Exchange service). At the end of the contract a new contract has been signed that allows German post-docs or Foreign post-docs resident in Germany with a special permit, to stay at NII to conduct their research project under the mentoring of NII researchers.

In the frame of the new agreement the post-doc can come to NII for minimum 3 months up to 2 years supported by DAAD. During that period they implement their own project, They have possibilities to recruit Master or Ph.D students to help them. NII being an Inter-university organization they can also visit NII partners, universities and research organization, to strengthen their Japanese network. 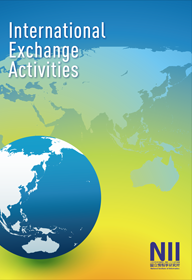 Introducing Pamphlet of International Exchange Activities. Contents of each pamphlet can be read by PDF.

Academic Employment Opportunities at the NII