About us  Research field introductions

The last decade has seen that our understanding of the principles of quantum mechanics lead to the development of technologies underpinned by it. These quantum principles of superposition and entanglement can be used to process, store, and transport information in radically new and powerful ways. We can now coherently observe, explore and manipulate the quantum properties of many different physical systems. We have extended both our theoretical and experimental capabilities to understand and fabricate quantum systems well beyond the few qubits level. This is where novel features and new science & technologies possibilities are emerging. Our research focuses around quantum computation, quantum communication, quantum metrology and sensing, high precision measurements, programming quantum computers and quantum complex systems. While our approach is theoretical, we have a strong emphasis through collaboration on the realization of these new and emerging quantum information based technologies. There are thus natural opportunities to engage with experimental research collaboratively with our partners.

The past 10 years and the next 10 years - Prof. GOSHIMA, Masahiro

A processor is the heart of a computer system. However, some say no more speedup of the processors is needed. I heard such opinions 10 and 20 years ago. If so, can they live with computers of 10 or 20 years ago? A good programmer only writes programs that can neatly work on existing processors. From another aspect, precisely because the processor speedup has been promising, wide variety of new applications have been developed. This continuous speedup provides the basis for the information society. A speedup in clock frequency, which had been one of the major factors for the processor speedup, stopped more than 10 years ago. Even after that, the performance improvement of processors has been continued by architectural means. My laboratory tries to extend the performance improvement of processors to the next 10 or 20 years, not by reforming existing techniques, but by a fundamental reconsideration on processor architecture.

Software: enabling technologies for IT

Software technology is the foundation of all industries and daily activities, whose key factor is achieving high quality and providing highly functional and reliable software systems. This field addresses the important academic issues of software science, which is indispensable for developing next generation information systems in the era of AI, from basic research to application research and from fundamental software technologies such as programming languages, software engineering, and distributed systems to advanced software technologies such as data engineering (especially data mining) and signal processing.

Nowadays many devices like smartphones are equipped with various kinds of sensors and big sensor data are gathered from them. By analyzing them, we can detect various events in real world. We study technology for managing and analyzing the big sensor data. We developed distributed spatio-temporal index for processing those big data, which speeds up sensor data retrieval by the order of magnitude. We also study latent models and peak detection algorithms for detecting anomalies in sensor streams. These techniques are applied to real world problems such as detecting incidents in large traffic network from GPS data from cars. We are tackling the problem of detecting the symptom of bridge faults from health monitoring sensors installed at bridges.

Crowdsensing is one of smart city applications to collect sensor data reflecting personal-scale, or microscopic, roadside phenomena using crowdsourcing. To collect data, a driving recorder smartphone application that records not only sensor data but also videos from the driver's view is used. To extract specific roadside phenomena,
collected data are integrated and analyzed at the service platform. One example is estimating road surface conditions. 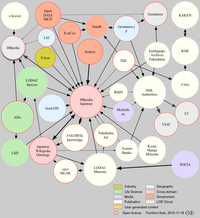 Our society is deeply engaged with Web, i.e., various social activities are mostly done with Web and they have furthermore been changed by Web. Web Informatics is the area of research in which data on Web is analyzed and modeled as social behavior to create new mechanism and architecture for future Web. It includes social network analysis of social media data such as Twitter and knowledge extraction from Wikipedia as collective intelligence. For instance, we collect and analyze NicoNico Douga data to model how people create new movies as massively collaborative process. We are also building the knowledge graph by RDF from data in the Web. The knowledge graph is built by collecting and connecting various knowledge sources including DBpedia Japanese. It is expected to work as artificial social intelligence.

An indispensable academic system for achieving the information society

Scientometrics is the study of measuring and analyzing science, technology and innovation.
We are exploring the basic points of academic research from the relationship between excellent research and support / investment of funds. Recently, we analyze factors posted from the correlation between academic research press release and newspaper publication. Research on press releases related to top-tier Japanese universities has shown a generally increasing trend over time, and the number of organizations with active press release programs has grown rapidly in recent years. In addition, academic articles related to universities in newspapers have been increasing with increase in press releases. On the other hand, it turns out that the carrying rate in newspapers varies considerably depending on the journals and fields in which the original paper was published. We are conducting multidimensional factor analysis from academic journal impact factor, Altmetrics, and other measurable quantities.
Through these studies, we are trying to find effective investment methods and timing for research, factors of newspaper publication and effective methods of dissemination.

SOKENDAI (The Graduate University for Advanced Studies)School of Multidisciplinary Sciences,Department of Informatics