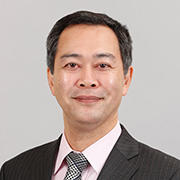 To enable computers to recognize the world outside their own, we have to provide them with systems equivalent to human sensory and imaging functions. To do that, we have to express real-world objects and phenomena so that computers can process them. We call this modeling.

Expressing an object as a collection of points

My research focuses on the modeling of three-dimensional figures. Successful modeling of such figures lets computers recognize objects and create drawings. To make this possible, we have to provide three-dimensional data to the computer. The most common method today
calls for expressing an object as a collection of numerous points. With this method, many points are placed on the surface of an object and the coordinates of these points are recorded.
The more densely concentrated these points, the more accurately the resulting data represent the actual object. This makes it possible to create high-precision models and allows computers to capture and express various aspects of an object.

But this method expresses just the overall shape of an object. Since all the points are independent, they don't indicate the correlation between points on two different objects, which prevents functions that would compare objects and examine common features. By looking at the shape of a cat and a dog, for example, humans can easily recognize common features, like four legs. For a computer to perform the same processing, it has to inspect the correlation of points in detail.

From imaging to matching

The task of comparing two objects to pick out resemblances is called matching. Matching requires dividing each given object into appropriate units and extracting partial features. To implement this, I focused on the correlations between points on the surfaces of objects. When many points are connected to each other, you'll notice that they are not connected in the same way. Some points are densely related to other points. In contrast, some points are not so densely related to other points, and deleting them doesn't make much difference. I removed points that weren't densely related to other points and divided each object into several parts. Dividing objects into parts makes it possible to compare the divided parts of two objects. In the case of a cat and a dog, we created models, divided them into parts like the head, tail, and legs, and compared the corresponding parts. Using this process, a computer can recognize that both have four legs and tails.