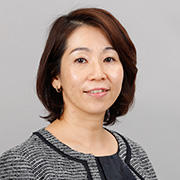 Visual imaging technology that merges into the fabric of daily life

Computers have added great convenience to our lives but remainーfor nowーconvenient machines that sit on desktops. Many people believe computers will evolve to incorporate a "spatially flexible interface" that lets users access them from anywhere in their house, using gestures to obtain information or to display an image wherever it's needed. I study video technologies to help realize such futuristic functions.

The luster and textural qualities of an object look different under bright sunlight and in a dark hallway. How an object looks varies significantly, depending on the light source. It's hard to reproduce these variations using conventional computer graphics technologyーeven when it's possible, it's painstaking and time-consuming. In my research, I'm trying to reproduce the luster and textural qualities of objects under various light environments, based on photos of the object.

So far, my research has made it possible to efficiently reproduce the way an object appears to our eyes based on a small number of photos by applying a mathematical sampling theory. Specifically, I take pictures of an object by shining a light from various directions, producing a composite image using special processing. This has allowed me to reproduce a realistic image that sparkles or casts a shadow depending on lighting conditions.

Projector technology for projecting images at any location

Applying the above-mentioned imaging technologies, I'm investigating optical correction systems for projectors. For example, when an image is projected on a wall with a polka-dot pattern, the wall pattern is visible through the projected image. So, I take a picture of the wall where the images will be projected and add essential factors, like the contents of the projected images and human visual characteristics, to apply special correction processing to the images. When the resulting images are projected onto the polka-dot wall, they look almost natural, with little visual disturbance from the wall pattern as if the images were projected onto a plain white screen when viewed casually, although careful examination of the images will show the wall isn't a standard screen.