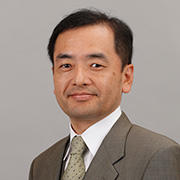 If large volumes of accumulated video and audio recordings could be utilized more effectively, they would be able to serve as useful resources for the development of computer vision and robotics technologies. My research goal is to achieve high-speed, flexible processing of large-scale multimedia databases of videos and audio recordings.

The diffusion of hard disk recorders has enabled not only broadcast stations but also ordinary families to store large amounts of videos. This is a significant result of technological breakthroughs, but the current technologies are not advanced enough to allow efficient search for a specific video or correlations between videos. Some recorders store the names of programs together with the video data, but no present technology enables advanced search operations, such as search for a "video in which someone is performing a specific action" or a "scene resembling a specified scene." In the bid to develop fundamental technologies that enable such video processing techniques, I am presently conducting research into database processing technologies.

Indexing is one method for enhancing the speed of databases, but video databases require new index structures different from those employed for character strings and numerical data. I have been addressing this unexplored field of research, conducting research involving mainly index structures and search algorithms.

Video analysis research has a long history, but handling large amounts of video footage has become possible only recently. As an experimental research, I am using recordings of broadcast videos totaling several thousand hours in length. This was unimaginable ten years ago. What is necessary now is a system that enables flexible use of accumulated multimedia databases, but today's computers do not offer sufficient performance.

In my research, I am focused on grid technology and SMP technology as the key technologies for solving the above-mentioned problem. Grid technology enables processing of large amounts of data by using many computers concurrently, while SMP technology is a technology to operate multiple processors in a coordinated fashion simultaneously in a single computer. By creating database algorithms suitable for these technologies, I would like to realize a new advanced multimedia database system capable of operating at speeds 100 times faster than conventional computers.