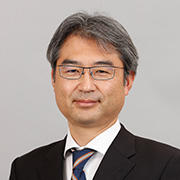 Now I am engaged in the network study area, but I did research on atomic and molecular collisions in my master's degree program at graduate school. I had made various experiments through the research, I started to get the strong feeling that I wanted to do research that would have something to do with product manufacturing and would actually be used out in the world.

Network technologies were starting to attract attention around this time. The idea of the broadband network were very exciting and innovative network infrastructure was expected to improve people's life styles. And I thought it would help fulfill my dreams of being able to work while living on some warm southern island. So I set my sights on network research. And I joined NTT and began working at NTT laboratories. This was just after 1990.

At NTT's research institute, I worked for research and development of the high-speed, high-capacity and high reliability network system. After that, I moved to NTT's business divisions and I was engaged in deploying the next generation data network which could handle the huge data volumes economically.

Based on an overarching vision, we conceived the outline and structure of the next-generation network. The process from conception to realization would take about five years. After it was completed, the network was to be used for a long time. This was challenging and very interesting work. Network development is similar to urban planning. It is started by contemplating the future and asking where and how many roads are required. And just like as it would be hard to redo a road construction, it is hard to redo a deployed network systems. Therefore network systems have to be used for a long time. However users demand will be changed. Thus some areas of network systems have to be modified to accommodate changing demands.

So how do we separate the core portion from the flexible portion? This the question was how to separate hardware--which can't be changed easily but is great at large-scale data communications--from software--which has the flexibility to accommodate various new functions, but which isn't so proficient at large-scale data communications. Another was how to meet the diverse requirements of customers for high security, easy handling of large-volume data, minimal delays in monetary transactions, and so on. There was no end to the challenges involved.

Pioneering the Future of International Research with NII's SINET

The people and institutions connected to the network aren't limited to Japan. With the new SINET set to launch in 2016, virtual intra-research-project networks between, for example, Japan, the US, and Germany, can be created whenever they're needed, and we can also embed systems that enable data transfers on demand requirements and functions that enable this across multiple countries. I think this will prove beneficial for international experimental research.

Up to this point, my research and development activities have involved practical applications. Networks are next to useless if they are not used. I listen to what people need and develop things to meet those needs. I think it's great when those things are put into an application for a useful purpose. Of course, we also need to carefully consider cost and feasibility issues, but I hope to be able to continue doing practical research to meet everyone's increasingly sophisticated needs and, ultimately, to create things that can be used.