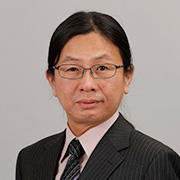 After capturing images, people sometimes wish they would change the setting of the camera, for example, viewpoint, focus, and so on. Our research enables us to realize such flexible free-viewpoint/focus image reconstruction by capturing and processing the detailed information of rays from objects with multiple cameras or special cameras.

The difficulty of 3-D modeling from captured images

Computer graphics technologies widely spread these days. For example, soccer and baseball video games are quite realistic. They easily produce realistic images with given 3-D modeling.

However, it is very hard to extract and model 3-D objects themselves automatically from captured images. Even a large number of captured images with high-resolution and various viewpoints are not enough to model simple objects like a pair of glasses. 3-D modeling of real scenes, that are very complicated, is almost impossible. For not only computers but also human beings, it is not so easy to determine whether some regions of a certain image stick out or sink in 3-D.

Incorrect determination directly causes the awful failure of 3-D modeling. There are more practical approaches without 3-D modeling for free-viewpoint/focus image reconstruction. Such application does not need explicit 3-D modeling, although the robot control applications do in order to recognize what exists and where it exists.

Our proposed method does not explicitly extract and model specific objects from captured images. It reconstruct desired different viewpoint/focus images directly from original captured images. Classical signal processing such as Fourier Transform is very effective for the image reconstruction without 3-D modeling.

By just applying multi-dimensional Fast Fourier Transform to captured images, that include the detailed information of rays from objects, by multiple cameras or special cameras, we can easily reconstruct different viewpoint/focus images.

Fourier Transform is not an old-fashioned technique, but still the most effective and flexible one, that can be applied to extensive fields. Our presentation draws the attention of those interested in mathematical approaches at international conferences. We find this research profound and challenging.

Academic Employment Opportunities at the NII