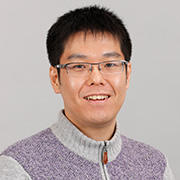 My current area of research is computer graphics (CG), and I am primarily involved in studying fluids such as water and air with two intentions.
The first is to enable large flows, high waves in the ocean, fast flows in rivers, etc., to be represented as visual graphics, quickly and with few calculations. It became possible to represent liquid flow using numerical formulas in the 19th century. Now, it is also possible to calculate those formulas using computers and carry out highly accurate computer simulations. These kinds of simulations are used a great deal in fields on which human lives depend, such as airplane design. They require a large amount of computation time, as many calculations must be carried out in order to find highly precise and accurate solutions.
However, flow calculation requirements vary greatly depending on their purpose. For example, the requirement of the movie industry is that calculations be done quickly, without too much worry about accuracy.
When creating a particular film, the producers may decide to use CG to depict a scene in which the surface of an ocean boils and swirls to form a whirlpool, from which a white dolphin leaps, conferring good fortune. What the movie industry people require of the computer simulation of fluid is as many prospective videos of realistic ocean surfaces and ocean water as possible within a limited time such that they can easily be compared in terms of visual appearance. The most important requirement in this example is that the representation of the ocean impress on the viewers the good fortune related to the dolphin. Sacrificing the physical accuracy and the likelihood of the result is acceptable to a certain extent.
My second intention is to venture to calculate phenomena that are not dealt with in engineering fields. For example, the formation of vortices when air or water flows around an airplane or boat can lead to vibration and noise, as well as energy loss and unexpected accidents. Computer simulations aimed at creating designs that make vortices unlikely to form are frequently important in the design of airplanes and boats. However, in the world of video representation, vortices are welcomed for adding interest. Therefore, I am researching calculation methods that can efficiently reproduce special, visually interesting phenomena such as vortices. The calculation costs of water formulas are known to be, in principle, very high, but imposing constraints on the formulas before introducing them into the computer makes it possible to not only reduce the calculation costs, but also represent "beauty." These "beautifying" constraints also preserve visually important characteristics of the flow. I believe that our experience of beauty is not simply derived from an appearance, but invariably has some sort of mathematical basis.

My current specialism is computational science, but I feel that it is very close to mathematics. When I was at senior high school, although I was good at mathematics, I never imagined that I would actually use it in my profession. I inadvertently discovered mathematics while absorbed in my research, and I feel that I came to understand it intuitively through accumulation. In my future research, I want to pursue further the kind of "goodness" or "beauty" that exists precisely because it is represented by computers.